I’ll be in NYC for a few days attending the 114th annual Toy Fair at the Jacob Javits Convention Center. The American International Toy Fair is a toy industry trade show held in mid-February in New York City. The event is open to toy industry professionals, retailers, and press representatives. It is owned and managed by the Toy Industry Association. Toy Fair’s promoters describe it as the largest toy trade show in the Western hemisphere.

I’ll be posting pictures from Toy Fair on Instagram, so check me out there, instagram.com/jeffmmckinney.

I’ll also be tweeting from the show at @CoCoCurrent.

There’s a interesting story on Gothamist today about a new home on the market. It’s in Manhattan’s Hudson Heights neighborhood, at 16 Chittenden Avenue, and built over a cliff just north of the George Washington Bridge. Apparently, the home is commonly known as “The Pumpkin House”, because from the New Jersey side of the Hudson, and with the lights just right, the house looks like a lit-up Jack-O-Lantern.

The 3-story, 3,144-square-foot, free-standing home was built in the 1920s on a steel foundation sunk into a steep cliff at West 186th Street. The house is listed at $5.25 million. You can check out the listing by clicking here. The following article is from iBerkshires.com.

PITTSFIELD, Mass. — Less than a week after a transportation finance bill was signed into law, Gov. Deval Patrick took a ride on the railroad tracks he hopes will soon feature passenger rides from the Berkshires to New York City.

The state is looking to buy and upgrade 37 miles of track from Pittsfield to the Connecticut border in Sheffield. The $113 million in planned track upgrades will support a passenger rail system that officials believe will be a boon to the Berkshire’s tourism economy.

“I think the potential economic impact is considerable. I think the opportunity of job creation and quality of life is considerable,” Patrick said after stepping off an old Massachusetts Bay Transportation Authority car he took from Sheffield to Pittsfield on Monday. “There is some work we have to do with the state of Connecticut to assure that they are ready to step forward like we are.”

The trip gave Patrick, who has a home in Richmond, a firsthand look at the conditions of the tracks. The governor said a passenger train wouldn’t be operational until three years after the “go decision.”

“I suspect from the go-decision, with our experience from previous transportation projects in recent time, there is an indication we can do it sooner than that,” he said. “But before the go-decision, as I was alluding to earlier, there is some engagement that we have to have with Connecticut.”

According to MassDOT Secretary Richard A. Davey, the $113 million estimate is only for the rail’s infrastructure. MassDOT not only needs to reach agreements with Connecticut but also decide on stations and develop an operation plan. (The governor disembarked near the city’s waste-water treatment plant.)

“Rail projects are usually on a longer-term track. But that we are here today and we’ve got equipment out here, it just shows the state’s commitment,” Davey said. “It is one that the governor cares deeply about, MassDOT cares deeply about and one we are going to work hard at to see through.”

Also riding on the train were officials from the Housatonic Railroad. The state would need to acquire the track from the owners and then reach an agreement with them for freight and executing the upgrades.

Owner John Hanlon said he has been in discussions with the state for about two years in trying to bring passenger rail back to the Berkshires.

Davey said the track needs significant upgrades because in many places the rail is the same laid some 90 years ago. But with the passage of the transportation bill, Patrick said the state has enough to complete its end.

Connecticut would be responsible for nine miles of track.

The state is reassessing its capital plans, though, because the transportation bill isn’t enough for everything the governor proposed to do. The bill had a rocky passage as it traveled through the Legislature, was vetoed by Patrick and then his veto was overridden last week.

“It is not the size bill we asked for but it is a big step forward,” Patrick said.

Davey and Patrick said they are looking at the state’s capital improvement plan to find ways to pay for the transportation upgrades. Davey said the passenger rail expansion project “ranks very highly” in the plans.

“We’re reviewing the entire state capital plan to see what priorities are going to make the cut over the next few years. But, what the Legislature gave us is a good step forward,” Davey said. “This is a project that ranks very highly and something the governor wants to see done. Over the next few weeks we’ll be combing through our plan.”

“I think it is an incredible opportunity for the Berkshires. I think we all know that rail is going to have to play a more significant role, not only in our transportation system but in our economy moving forward,” Downing said. “We know full well that there are a lot of connections between the Berkshires and New York City and we know that we have more of a regional connection to New York City more than we do to other major metropolitan areas. …

“This isn’t just something [the governor] would like to do. It is something we have to do if we want to continue to grow and prosper.”

If the project does fall through, Patrick doesn’t see the Legislature approving any more revenue to make it happen in future years. He said he asked for more funding for the transportation plan because “it was the moment.” The bill raises the gas tax 3 cents, raising taxes on a pack of cigarettes by $1 and implements a sales tax on computer services this week.

“My sense is that the Legislature has done all they are going to do for a while in raising new revenue, which is why I pushed as hard as I did to make the most of this moment,” he said. “This is about very targeted, high-impact investments.” 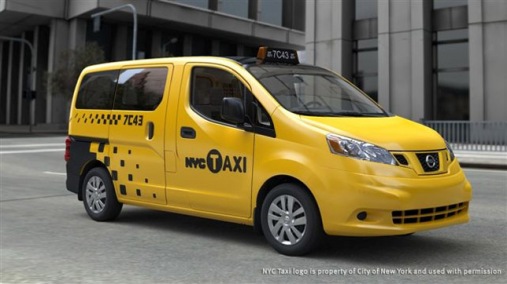 Big news for the Big Apple as New York City has unveiled the next generation of city taxis. The Nissan NV200 was introduced to the public yesterday at the New York Auto Show and it’s packing some cool new features.

The NV200 will come with USB and 12V power ports for charging your gear, a rider controlled GPS system and the ability for the rider to control the heat and AC. Some of the lower-tech features include simple but highly functional details like more leg room, a flat floor so you can easily slide across the seat, doors that slide open, lights on the floor and ceiling and a glass sunroof. Everyone seems excited about the anti-microbial odor-absorbing seats that will supposedly keep the car smelling fresh but I’ll believe that when I smell it.

With all these new and improved features it seems odd that the cabs will run on old-fashioned gas engines rather than hybrid or electric ones but there is talk of an electric version arriving in 2017.

The new taxis should be showing up on streets in late 2013. For more information and specs, visit Nissan’s official site by clicking here.

One of my least favorite aspects of life in NYC was the summer. We didn’t need a heat wave to make life uncomfortable – all that concrete and glass could easily turn a typical hot day into a sweaty mess, especially if your day began by waiting 10 minutes on a subway platform. Gross.

Even though I’m just a few hours north of the city now, the weather is dynamically different. One thing is for sure, if it’s hotter than hell up here, it must be ungodly hot in the city right now.

So for all my friends sweating in NYC, here’s a little ditty from Marilyn Monroe, Heat Wave!