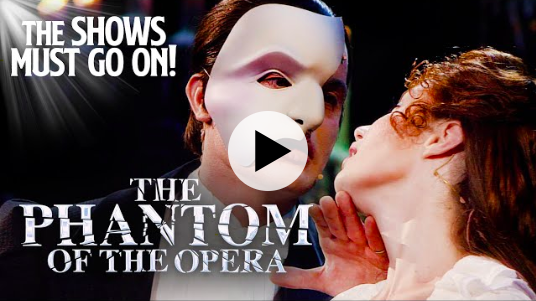 This weekend, watch a Broadway show from your home! Andrew Lloyd Webber’s Really Useful Group, in partnership with Universal, is offering a free broadcast of ‘The Phantom of the Opera’ on the YouTube channel, The Shows Must Go On!.  The show goes live on Friday at 2pm (EST), and will be viewable for 48 hours afterward.

From Phantom of The Opera at the Royal Albert Hall (2011): In celebration of the 25th Anniversary of Andrew Lloyd Webber’s The Phantom of the Opera, Cameron Mackintosh produced a unique, spectacular staging of the musical on a scale which had never been seen before. Inspired by the original staging by Hal Prince and Gillian Lynne, this lavish, fully-staged production set in the sumptuous Victorian splendour of London’s legendary Royal Albert Hall features a cast and orchestra of over 200, plus some very special guest appearances.

LOCATION: Stream on YouTube at The Shows Must Go On!

Snow Day! ❄️☃️#snowday #winter #columbiacountyny
From @catamountmtnresort 🎼More live music coming your way this weekend.🎼
From @namiccny Our Family Support Group meets every other Wednesday of each month. We believe that this is the best option because our Family Support Group is led by those who have lived experience and may be in similar shoes to you. Swipe through our thread for further info on why our Family Support Group may be right for you! Remember, you are never alone in this journey. #support #hereforyou #mentalhealthawareness #nami #mentalhealthmatters #columbiacountyny
It’s a winter wonderland in New Lebanon. #snow #columbiacountyny
From @visitchathamny Tonight is the start of a very fun weekend in Chatham, so come on out for Ugly Sweater Night 8:00am-11:00pm
Congrats to ⁠Jack Dylan, 441 Warren Street⁠ selected as Best of the Best Hudson Winter Walk Window. Info & more from @hudsonhallny It's just hours before Winter Walk, and you know what that means... Hudson Hall announces the 2022 Winter Walk Window Decorating Contest Awardees!!!⁠
Santa came to the village of Chatham tonight! #chathamny #holidays #christmas #santa