Shakespeare & Company has launched a new, free lecture series to be held Fridays during the spring and summer. Hosted by educator and member of Shakespeare & Volunteer Company Ann Berman, the series will examine various themes surrounding many of the 2022 Season’s titles and will feature various directors, cast members, design-team members, or others at each presentation.

In the event of inclement weather, an indoor location will be chosen, and ticket holders notified via email.

TICKETS: Free, but required
Available here
Donations will be accepted at the end of each event.

The Hudson Area Library, in collaboration with the Leisler Institute for the Study of Early New York History & the Gotham Center for New York City History, presents: A Truly American Form: Anglo Dutch Houses, Their Roots, Form, and Legacy by Ian Stewart. In the former New Netherland a new house form arose in the latter years of the 18th century and became a common sight in New England in the first half of the 19th century.

This talk focuses on the framing of these houses and their various forms, as well as a brief discussion of their English and Dutch predecessors, and the circumstances which may have led to the creation of this hybrid.

Ian Stewart is owner of New Netherland Timber Framing and Preservation, past president of the Board of Directors of the Preservation Trades Network, and a member of the Timber Framer’s Guild. He received a Master’s degree in Preservation Studies from Boston University’s School of American and New England Studies. His woodworking career began at SUNY New Paltz and, later, as a restoration craftsman at Historic Huguenot Street in New Paltz, New York. He is involved in preserving historic traditions in woodworking, timber framing, blacksmithing, and masonry skills. He received the New Netherland Institute’s Alice P. Kenney Award in 2018.

ADMISSION:
Free. All are welcome.

“Where Have All the Monarchs Gone and What We Can Do About It?” by Maraleen Manos-Jones.

Environmental activist and master gardener Maraleen Manos-Jones is known as the “Butterfly Woman” as she has been raising, tagging, and releasing butterflies for over forty years. She is the author of The Spirit of Butterflies: Myth, Magic & Art, published by Harry Abrams. Manos-Jones was the first non-native woman to find the monarchs’ overwintering habitats in Mexico in 1977 after a two month search in the mountains, and she has returned to Mexico ever since working with the mountain people, helping to plant over six million trees around the monarch sanctuaries. She will share up-to-date information about the challenges the monarchs face and what concerned people living in the United States can do to help protect them.

“Maraleen is a great, impassioned, enthusiastic speaker, with fabulous stories and slides,” says Vivian Wachsberger, co-chair of Hidden Gardens. “The talk will be informative, educational, and entertaining.” 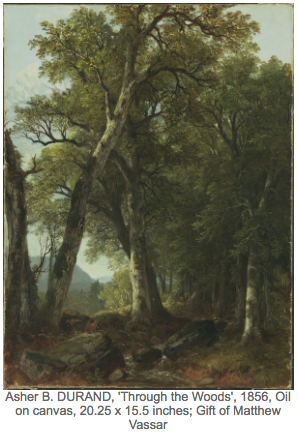 The Columbia County Historical Society presents an illustrated lecture with Dr. James Mundy, the Vassar Museum Director. The lecture is titled, “What Can You Give Me for Seven Dollars?” ~ Building the Founding Collection of Hudson River School Art at Vassar College.

The Vassar College Collections & Hudson River School Paintings (1825-1875) are the theme of this April lecture sponsored by the Columbia County Historical Society.

Dr. James Mundy is a graduate of Vassar College, returned to campus in 1991 to become the first Anne Hendricks Bass Director of the Frances Lehman Loeb Art Center. He earned his Ph.D. from Princeton University and has held teaching positions at Northwestern University and Mount Holyoke College. From 1986-91 he was the chief curator at the Milwaukee Art Museum. He has published and organized exhibitions on many diverse topics from Italian Renaissance art to American art and the history of photography,

ADMISSION:
Tickets will be available at the door: $15 for CCHS members;
$20 for non-members.

What is the difference between English Barns and Dutch Barns? Hilscher will give an overview of local barns in the Hudson Valley, mostly in Columbia and Greene Counties.

ADMISSION:
FREE and OPEN TO THE PUBLIC

Snow Day! ❄️☃️#snowday #winter #columbiacountyny
From @catamountmtnresort 🎼More live music coming your way this weekend.🎼
From @namiccny Our Family Support Group meets every other Wednesday of each month. We believe that this is the best option because our Family Support Group is led by those who have lived experience and may be in similar shoes to you. Swipe through our thread for further info on why our Family Support Group may be right for you! Remember, you are never alone in this journey. #support #hereforyou #mentalhealthawareness #nami #mentalhealthmatters #columbiacountyny
It’s a winter wonderland in New Lebanon. #snow #columbiacountyny
From @visitchathamny Tonight is the start of a very fun weekend in Chatham, so come on out for Ugly Sweater Night 8:00am-11:00pm
Congrats to ⁠Jack Dylan, 441 Warren Street⁠ selected as Best of the Best Hudson Winter Walk Window. Info & more from @hudsonhallny It's just hours before Winter Walk, and you know what that means... Hudson Hall announces the 2022 Winter Walk Window Decorating Contest Awardees!!!⁠
Santa came to the village of Chatham tonight! #chathamny #holidays #christmas #santa